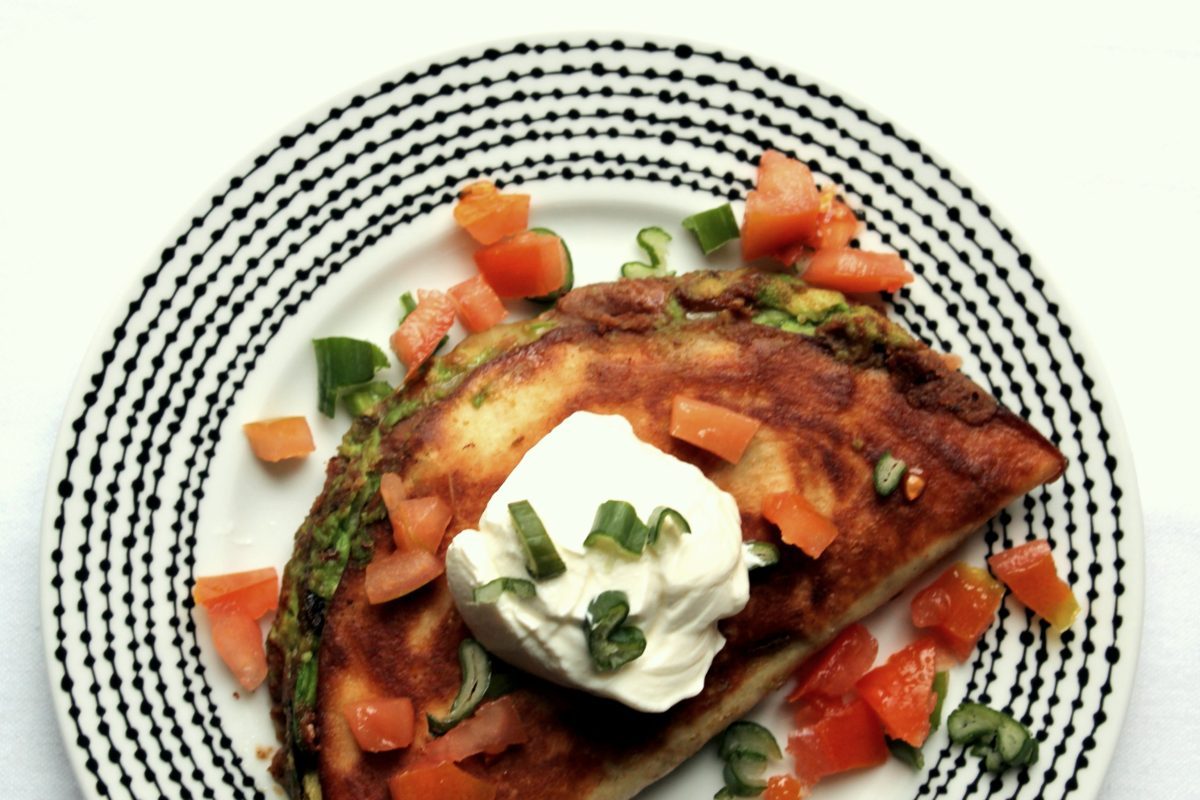 I ummed and ahhhed over whether to blog this recipe. It’s a quesadilla, right? It’s pretty basic. And yet, it’s a very addictive quesadilla which I’ve been eating all week so… how could I not share it with you all? 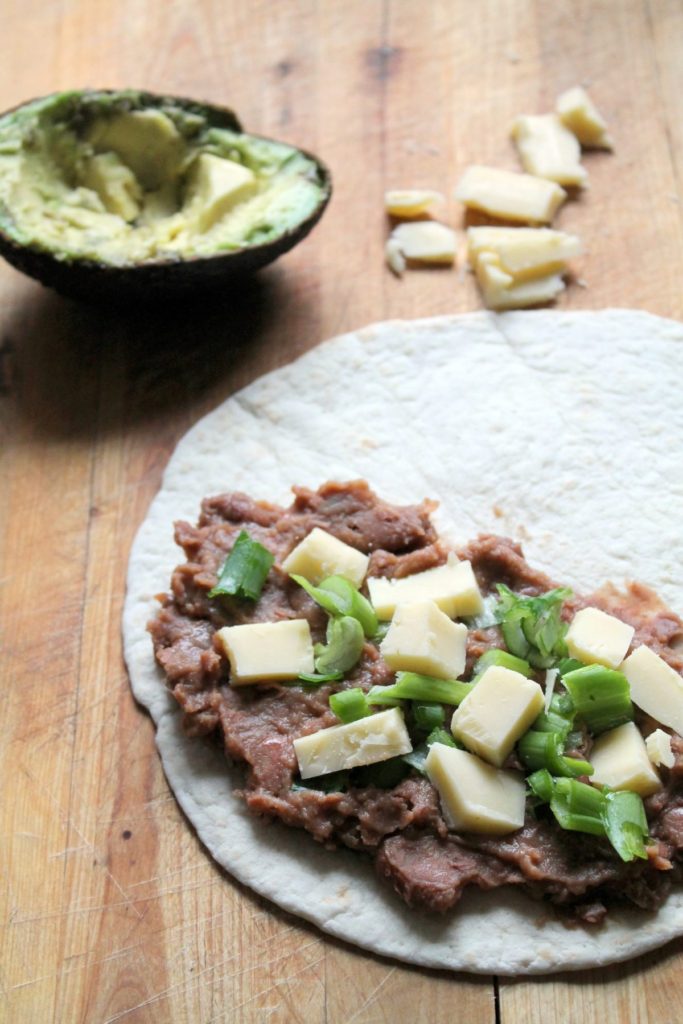 It started with a crockpot full of refried beans. I think that home made refried beans are the #1 reason to buy a crockpot. I have never used canned refried beans because eeew, so usually when I need refried beans I do a weird half-hearted stovetop thing with canned pinto or black beans and then sort of mush them up and, well, they aren’t very good. Crockpot refried beans, however, cook for a good long time with onions, garlic, veggie stock and jalepenos and they are outstanding. I could not believe how good there were. If you want to try them, I used this recipe on Mel’s Kitchen Cafe so head on over there and check out the recipe. (I adjusted it by adding some vegetable stock powder- so they were super salty! It was unnecessary but delicious. I also didn’t bother blending them, just mashed them in the slow cooker and left some whole. I cooked them for, like, 9 hours so they were falling apart by the end!) 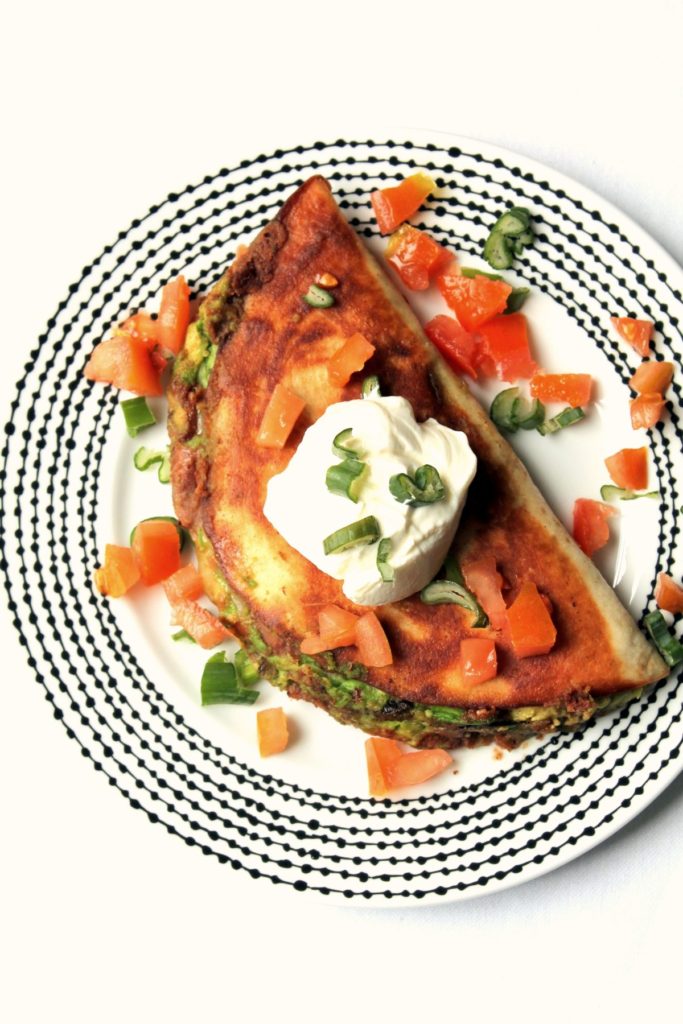 So. That’s the beans. I made a big batch of them for enchiladas, but then I realised I had a LOT leftover, and no freezer space, and so a week of eating these quesadillas followed.

Beans are a big part of this dish, but the addition of cheese, avocado and green onions ensure that there are lots of flavors and textures and it’s not just a big bean overdose. 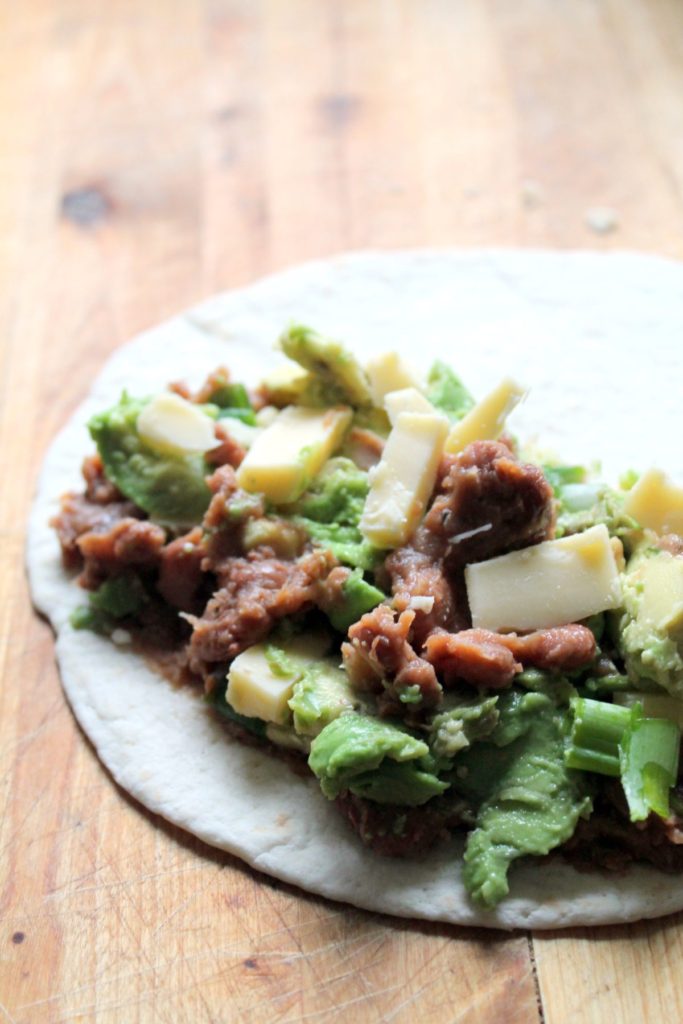 See what I mean? Lots of avocado in there, which really breaks up the density of the beans. The cheese is cut into chunks, not grated, so it melts down but retains it’s shape, and crunchy green onions add even more texture and taste. Topped with cooling greek yogurt and chopped tomatoes, every bite is a little bit different.

For even more excitement, it’s fried in olive oil so the tortilla goes super crispy. The oil gets around the sides a little too and crisps up the part of the filling that’s exposed. So it’s kind of like a chimichanga, but lazier. 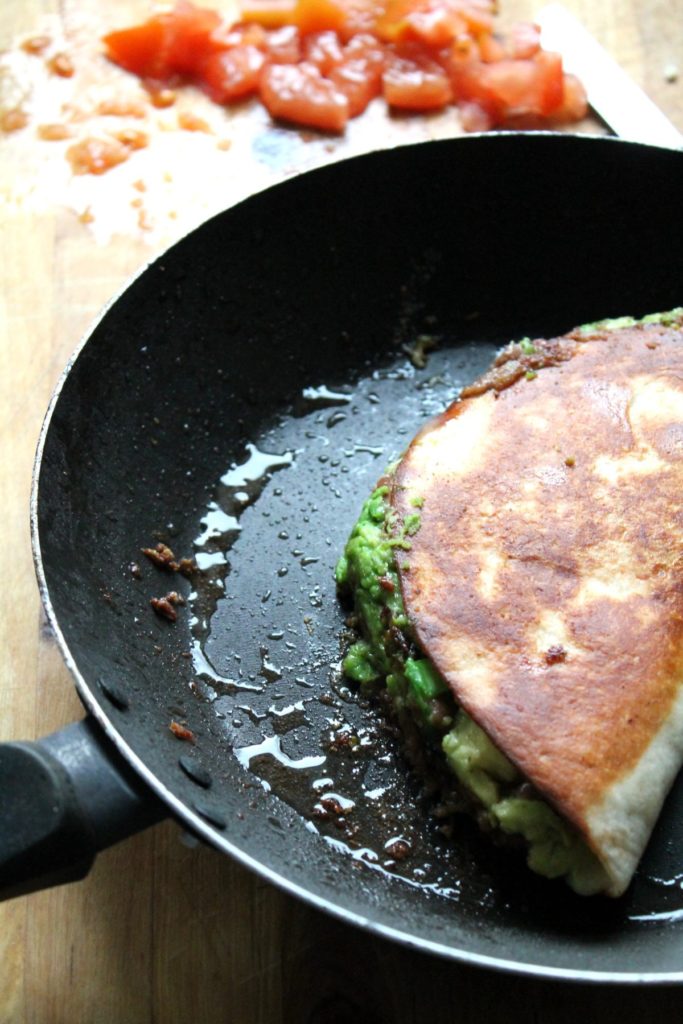 It’s way better than any quesadilla I’ve been served in a restaurant, if I do say so myself. But then again, it’s not a cute appetizer that you can dip into guacamole. It’s more of a meal that you would eat with a fork because it’s totally overflowing with stuff.

Making this monstrosity attractive for it’s photo shoot was a noble goal, but I’m not sure I succeeded. I mean, the bits of filling seeping out on the sides are this weird avocado / bean mush that’s a little bit oily and fried. 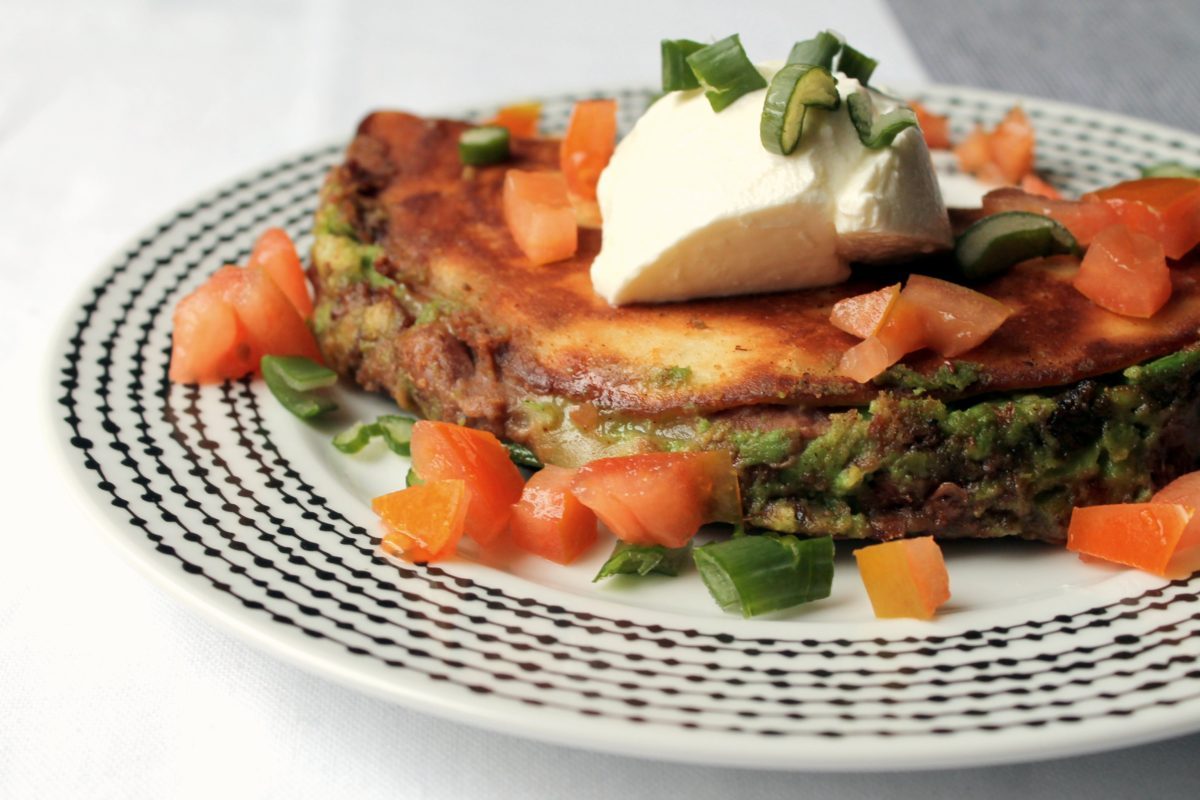 Tastes good, I swear. But not exactly the height of attractiveness. After 250 photos (!!!) these were the only six I could subject you to, so if you think these are bad, well… never steal my computer.

At the same time, while these look all fried and dirty, that does not diminish how fresh and lovely the ingredients are. A little olive oil in moderation never hurt anyone, and so long as you understand how calorie-packed this is, there is no need for guilt. Just one quesadilla will fill you right up, even if it looks a little small. (I photographed these on a side plate and the tortillas are fajita sized rather than burrito sized- but it was plenty enough for dinner!)

I’m being vague with measurement here. I have no idea how big your tortillas are and it felt a little pedantic to measure it all out, so take a look at the photos of the assembled quesadilla to get a sense of proportions. 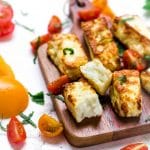 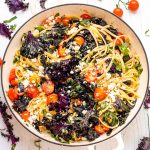 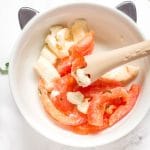 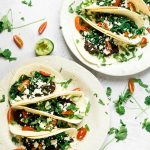