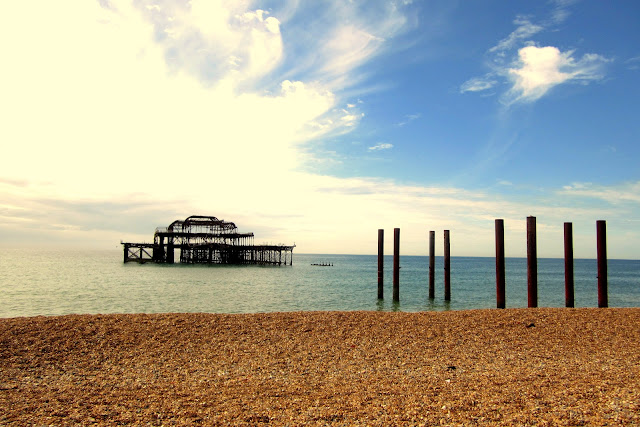 Ah, Brighton. For UK veggies, it doesn’t get much better than this.

Mr. Veggie and I headed to Brighton for a short mid-week break. It was our entire summer holiday this year 🙁 with money being a bit tight. But that 48 hours gave us everything we needed from our summer holiday- amazing food, a lost day on the beach, and SUN. Yes, a whole day of sunshine. We have the pink noses to prove it.
I spent a rather long time deciding what to do with our two dinners in Brighton, eventually settling on The Prince George for pub grub and Terre a Terre for a special treat. And I decided to review them for you reader folk.

I use the term “reviews” loosely here, because I am certainly not a qualified reviewer and I only visited these establishments once each. I know it takes more to have an authoritative view. But these are my… impressions, shall we say… 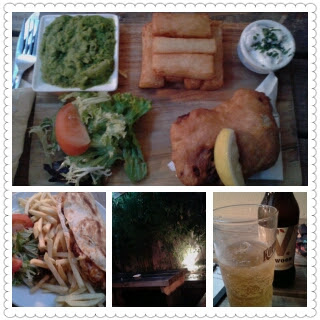 And I love to eat in pubs, at least I always think I do. Pub food conjures up lovely images in my head of really hearty English grub. Warm, homey, stodgy, carby food. Perfectly cut chips, perfectly baked cauliflower cheese, pies with perfect pastry and perfect mash…
But I don’t know where I get this image from, because lately it never seems to work out that way. It’s all butternut squash risottos and thai green curries. While everyone else gets their steak pies and their fish and chips. Sigh.
So an all vegetarian pub food menu was a pretty exciting proposition for me. And I was not disappointed.
First of all, it was a really beautiful pub. It had a clean and modern feel to it, while retaining its charm- lots of nooks and crannies to hide away in. It was a rainy evening, and we opted to sit outside in the covered beer garden, which was full of lights and green plants. There were leaky spots in the rain, but plenty of tables which were fully covered so it was a very cosy spot.
They served my favourite cider, Wyld Wood, which was a bonus. As if a whole veggie menu wasn’t enough to keep me happy.
So, drinks in hand, seats found… time to study the menu.This is more of a modern pub menu than old style country pub menu. Some very English choices to please my traditional pub loving side- a ploughmans, veggie burgers, beer battered halloumi and chips, asparagus pate- as well as a range of Tex Mex and Asian dishes.
I opted for the beer battered halloumi and chips, wishing to indulge in the purest form of pub food available to me. Mr. Truffle opted for a  Tex Mex classic- the chili dogs.
I was nervous, if I am honest, about my meal. Essentially I had just ordered deep fried cheese and chips. God help me. I like my rich food, but this had the capacity to go very, very wrong.When it arrived, however, all was well. I was really pleased to see that the portion, while generous, was not insane. There was a fair amount of mushy pea and salad to complement the stodge, the chips were very chunky, and it was hearty but not at all greasy. It was presented (as shown above) in a lovely arrangement, which kept it feeling rather manageable. I finished all of it and felt full, but not sick.
Mr. Veggie’s chili dogs… well, that was a slightly different beast. It was an all-out Tex Mex feast. Sausages, chili, cheese and guacamole stuffed in a tortilla with a heaping pile of skinny fries. Wow. It felt appropriate to the dish, though, as this sort of cuisine lends itself to excess. You don’t order chili dogs if you want something delicate. It was big and it was messy. It would be amazing for a hangover.I wish we could have tried more- they had so many different types of cuisine it would have been good to try out some other things, like the pasta or the roast. It’s tricky as a vegetarian when you are used to having 2 or 3 menu options in any given place, to suddenly have the full range of options. It is slightly paralysing. “You mean, I have to choose one thing from ten? Are you serious? Is that even possible??”I am sure I could get used to it though. 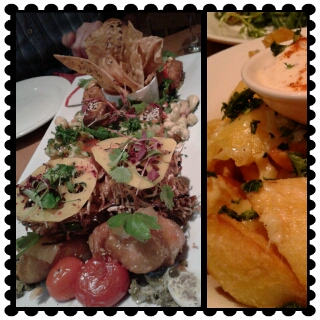 I have been dying to go to this restaurant since I first heard about it. A vegetarian restaurant which is known for being modern, innovative and bold- we just don’t get enough of these. We all know and love the healthy vegetarian cafes, but I am more of a restaurant person at heart. I want to sit in a dimly lit room, pore over a menu while sipping chilled wine, and spend a couple of hours of my evening savouring my dinner. And that is what I got from Terre a Terre.

After much deliberation on my part, we ordered the Terre a Tapas platter with 2 side dishes to bulk it out- the rocket and smoked tomato salad and the truffle chips (naturally).
I wasn’t sure what to expect from the Terre a Tapas. I was concerned it might just be the more basic nibble style dishes and we might miss out on the extraordinary food which they are famed for. This is not at all what happened. There was food from all over the menu, including items from their main dishes and starters.
As an added bonus, everything was perfectly portioned in two, which makes food sharing just that little bit less stressful, if you ever found it stressful to begin with. (Go on, admit it- there is nothing worse than your dining companion swiping something that you had your eye on, and not being able to blame them because you’re meant to be sharing after all, so you then have to feel guilty about your lack of generosity at the same time as feeling quite affronted. Nothing worse.)
Our verdicts on the Tapas? It was amazing. We both loved it, but with so much variety, different things stood out to both of us. We both agreed that the Arepas Chili Candy was our favourite. I was also struck by the potato dauphinois, with the lime accents and the contrasting textures, but that one passed him by. It was the other way round with the black beans and greens which were more of a filler for me, but a highlight for him.
Something rather unusual happened- he was full before I was, and so he skipped out on better batter (halloumi fried in chip shop batter) and I had to eat both servings. (and yes, I had eaten this as my main the night before- but that wasn’t going to stop me!) I loved it, but lets face it, I was always going to love deep fried cheese so that doesn’t mean a whole lot in itself. What made it extra special, though, were their accents to it- a caper tartar sauce, a vodka spiked tomato and a quails egg, which added flavour and texture, so it wasn’t all about the fattiness.
We didn’t particularly need the side dishes, in hindsight- if we wanted to get dessert, the tapas would have been enough. But these were two things I simply had to try.
The smoked tomato rocket salad was everything I hoped it would be, with small but powerful morsels of smoked sun dried tomato and some extra crunch from the seeds scattered throughout. The truffle chips, well, I’m an easy sell when it comes to truffle anything, but they even managed to exceed expectation. I have serious envy over this dish because all my attempts at making truffle chips result in limp, over-oiled chips. These were chunky and dry enough, but perfectly infused with the truffle flavour. The lemon mayo was a nice complement, just a little bit went a long way. This is a dish I will devote myself to getting right. One day.
And then the bill… you know, it wasn’t bad at all. £54 for all that food plus a bottle of their cheapest wine (which was organic and bio and pretty darn good) And it would have been less if it weren’t for the fact that I insisted on truffle chips, because they do have a great offer at the moment with the tapas plate + chunky chips + carafe of wine for £39. And this would be a perfectly substantial meal.
The service, I would also like to point out, was perfect. The staff were friendly, attentive and knowledgeable about the menu. It did take a while for our food to come- it was very busy, even on a Tuesday night- but this doesn’t bother me when I am out for a nice meal. More time to soak it all in and anticipate the food to come.
Mr. and I have fairly different preferences when it comes to food- I prefer things stronger, richer, creamier and he prefers things lighter, fresher, crisper. Both of us came away from this meal feeling really content, like our needs had been perfectly met, despite having eaten the exact same meal. Such is the genius of really great food.

We stayed in the Motel Schmotel– what a great find. It’s a really cosy, modern B&B- not a faded floral duvet cover in sight. Everything was clean and fresh. They had a handful of veggie breakfasts to choose from- we opted for the veggie full english one day, and museli with yogurt the next. They were great quality and just the right size. Other options included egg and soldiers, croissants and porridge with maple syrup. They delivered breakfast to the room for no extra charge, but had a nice breakfast room in the lower ground level too. The extra touches made this place really special- the mini fridge contained cold water and milk for us and this was complimentary. They told us to “just ask” if we needed any toothpaste or other commonly forgotten toiletries. They left penguin bars in our room instead of those awful tea biscuits which most hotels leave which are inedible and have a shelf like of appx 9863538 years. We will definitely return here.

Our ice cream cravings brought us to Ice Cafe on the seafront. They had a really fun assortment of flavours, such as cake batter and peanut butter, with a gelato style ice cream base. I am a sucker for novelty ice cream flavours so this went down very well for me. There are a lot of ice cream places on the sea front but if you are tired of Mr Whippy and Magnum, this place is well worth a visit.

Brighton, we will miss you… 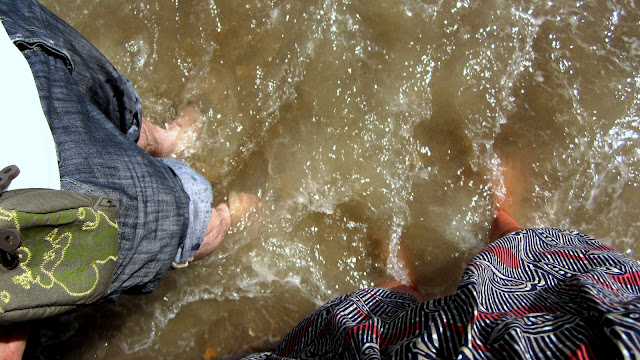 2 comments on “Brighton – prince george and terre a terre reviews”