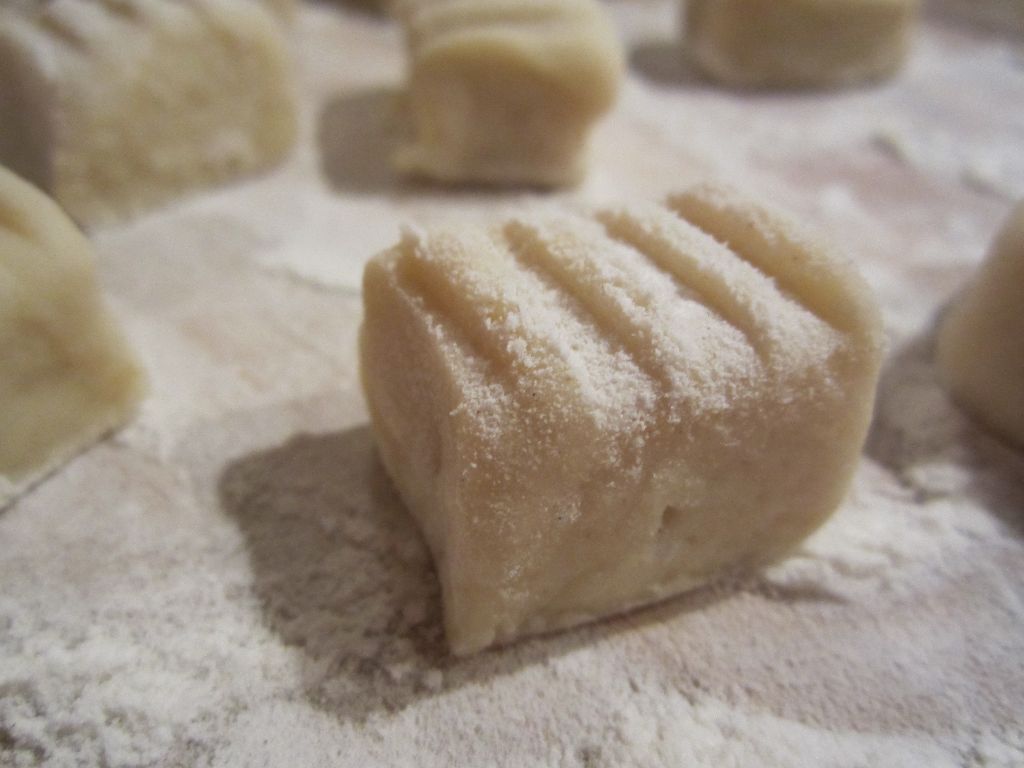 I am going through a phase where I make gnocci about once a week.

This is in celebration of finally getting it right.

Oh how I tried- for years- to make gnocci happen. I tried so many recipes and I followed them to the letter but I kept ending up with what was essentially boiled mashed potatoes falling apart in a pan of water, which would then turn into a big old lump of sticky mashed potatoes covered in tomato sauce in a bowl. (It was actually kinda good, in its own gooey way- we all like mashed potatoes right? It just wasn’t gnocci and when you set out to make gnocci its usually for a reason, i.e. wanting actual gnocci)

I got there in the end. The first recipe that worked for me was Simon Rimmer’s recipe in The Accidental Vegetarian and I’ve used his measurements for this recipe.

If you are anything like me, when you are first starting out with your gnocci making you are probably going to make a few batches that are on the heavy and gummy side. I still haven’t really got the hang of that elusive melt-in-your-mouth gnocci and I’m about 10 batches in.

But bearing that in mind, a nice tomato sauce is the perfect accompaniment.

And adding spinach to stuff is always a good idea.

So here are two recipes for gnocci florentine- one is a nice homey bake, the other is a little more delicate and special. I’d start with the first and move up.

So, the original recipe says it serves 6. In my house it serves 2. Well that’s embarrassing.

I think if this is served as a starter or side, 6 is realistic. As a main meal with side dishes such as salad or garlic bread, I’d say 4. But on its own? If you are feeling piggy? You might find that there’s no leftovers between 2. 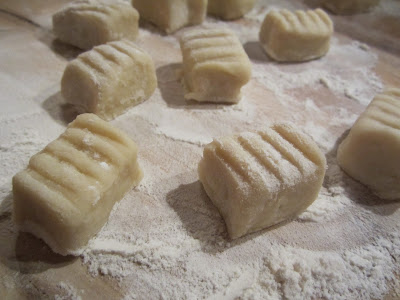 
Bake or boil the potatoes until cooked- some recipes are adamant about baking, so do this if you have the time. I have had successes and failures both ways, but it stands to reason that baking is the superior method when you need to keep the potatoes as dry as possible. More water equals more flour needed equals more heavy / gummy gnocci.

I do think it is important to use a ricer if at all possible because it helps keep the potatoes really dry. They sell them at Ikea so its not a huge investment, but failing that, try grating cooled potatoes with a cheese grater as recommended by Smitten Kitchen here.


So- rice or grate into a bowl, throw in some salt and mix around with a wooden spoon.

I always have to stop and admire how pretty freshly riced potatoes are, and eat a little bit with my fingers. That might just be me though.

Now whisk the egg in a seperate bowl and then pour into the potato mixture. Mix until it is somewhat incorporated with the potato but don’t over mix. Then start adding the flour, a handful at a time, and keep mixing with a wooden spoon until it becomes dough like enough to pick up with your hands. At this point start kneading.

(I find that kneading with my hands too early results in it getting all stuck and becoming impossible to work with, so do try to wait until its the right texture to avoid a gigantic mess. To be fair, the gigantic mess will happen anyway, just at a later point. I don’t really know if it’s avoidable.)

You might find that you need to add more flour to the recipe than it calls for just to be able to handle the dough. This isn’t ideal because it means a tougher gnocci, but it happens to me a lot and is down to excessive moisture. The best ways to avoid this are using the right potatoes (floury!), baking and not boiling the potatoes, ricing and not mashing them. But don’t worry if this happens to you at first- they will still be delicious, but they will be better served in a nice moist tomato sauce than something like a pesto or a cheese sauce.

So… once the dough can be worked with and isn’t sticking to your hands every time you attempt to break a bit off, start taking chunks off and roll them into long sausage shapes on a floured surface. Then take a knife and chop them into chunks. Press the back of a fork on the top to create ridges- I usually use my fingers and thumb to shape them a bit too as pressing with a fork tends to squish them!!

Boil a pan of water and drop gnoccis in- they will eventually float to the surface. Scoop them out after they have been floating for about a minute. 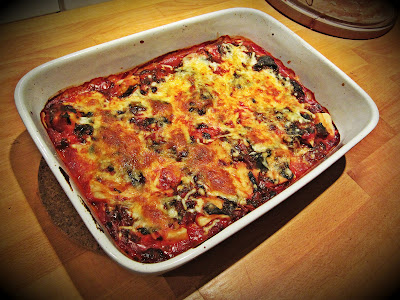 In a saucepan, heat the garlic and chili flakes carefully in olive oil. When they begin to sizzle, pour the passata in. Add red wine vinegar and simmer until the gnocci is ready.

When ready, place the drained gnocci in a large 9×13 casserole dish.

Turn the heat off the sauce and add spinach and basil, mixing it in until the spinach starts to wilt.

Pour the tomato and spinach mix on top of the gnocci in the dish and stir it all together in the pan.

Top with mozzarella and bake for 20 to 30 minutes, until the mozzarella is browned. 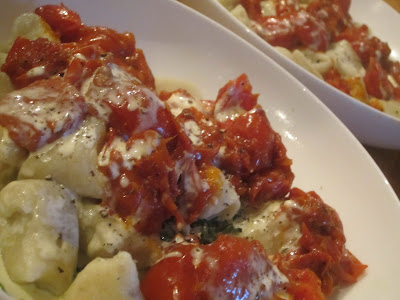 Chop the cherry tomatoes in half. I don’t remove the skins but if you would prefer to do so, feel free. I can see the benefits of doing this- I am just lazy.

Heat up some olive oil in a pan and start to cook them on a medium heat until they start to reduce.

Add some salt and pepper.

Turn to a low heat and go make a start on the gnocci while it simmers away.

After about 10 minutes the liquid will have reduced a bit and they might be sticking to the pan. Deglaze with the white wine, and continue to simmer on a very low heat while you are preparing the gnocci. If at any point they seem to be reducing too much, just switch off the heat and resume closer to the time it will be ready.

Now there’s a bit of a balancing act to do. You want to prepare the spinach at the same time as cooking the gnocci.

First get the gnocci into the boiling water. Then very quickly sizzle the garlic for a few seconds in a wok and add the spinach. Sautee until just wilted. Add some salt and pepper… and butter if you like.


(I try to resist the latter with varying degrees of success.)

To plate this dish, put a layer of spinach at the bottom of the bowl. Top with gnocci, then tomato sauce. Finally, drizzle the cream over the top.

Grind some black pepper on top and voila!