A diversion from postings of those culinary, it’s my turn to chat about my efforts at growing some of the food that end up in the recipes on these pages. I stress my work in the garden is pretty much sub-amateurish, if there is such a category. So, while I’ve managed to grow a small crop once before, don’t be taking anything as gospel, for there’s many a-thing I may be doing wrong (and anything I do right a case of more luck than judgment). So, this is my journey and you’re welcome to join me!

As you may have figured, Mrs Veggie devours the garlic. So, when I started researching what food I could try to grow in our light-deprived, pest-laden garden, I figured these little white bulbs might be a good crop to start with. Considering its a crop that can thrive relatively well in quite shaded areas, and one ignored by the slugs, due to the rubbery toughness of the plant’s shoots. Above all, how hard can it be to grow a crop, even in semi-optimum conditions, which practically tries to re-grow itself if you leave it a little too long at the bottom of the veg basket?

My garlic growing story begins with an outright failure; the garlic I was intending to grow was seed garlic I bought at the end of last year. I originally intended to put this in the ground at the end of last year but I figured against this, as the beds in which I’d plant them were getting no sunlight at all. So I figured I’d save the seed garlic through till late winter, however come March when I went to check on the garlic I’d stored in as cool, dark and as dry a place as possible, it had all melted into a mouldy, smelly sogginess. This is the second time I’ve tried to store seed garlic for an extended period of time, and the second time it’s not worked. The lesson?… once you’ve bought seed garlic, make sure you get it in the ground within a couple of weeks. So, having originally bought my seed garlic from a high-end specialist gardening supplier, I ended up rushing down the road to a 99p Stores to get my hands on a few garlics from there. I was originally quite impressed by my recession-busting bulbs; the packaging read ‘Allium sativum’. Hmmm, what’s this garlic variety I pondered(?), only to find out after looking it up this was simply the scientific name for garlic. Ah well.

Getting the bulbs home, I started prising these apart, getting them ready for putting in the ground. Preparing garlic for planting involves the same process as separating apart individual cloves for cooking. You just have to be as careful as possible to ensure the outer, paper layer of each clove remains intact as any cloves which lose any or all of this layer are unsuitable for planting, as their ‘nakedness’ exposes them to rot in the ground. Most of the time, due to the odd pair of cloves sharing part of a protective layer between them, you’re likely to end up with two or three cloves which’ll be unsuitable for planting on. In which case, to ensure a waste-free process, just put these aside and chuck ’em into your garlic tin for cooking some other time. 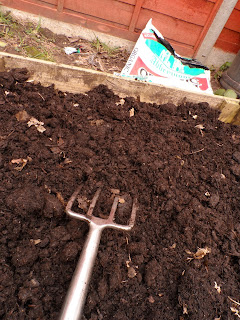 The plot I’ve got for growing my garlic is a 1x2m area of raised bedding. Garlic’s a handy crop though, in that smaller amounts can be grown in much smaller spaces, along a long, thin window box for example. So long as there’s at least some sun, garlic can grow in loads of places and spaces. I filled the raised beds with organic compost I’d bought from the local garden centre. This seemed to work for last year’s crop. One of the most important soil conditions for garlic is that there’s enough air and space for the seed to move about and mature (into a bulb) once planted. So avoid dense, clay-like soils and if your area is dominated by this soil type (as is ours!), then that’s where the raised beds (or any other suitable container) comes in handy! To the organic compost I did add a little bit of our home-grown compost, mainly because I knew just a small amount would add loads of little worms to the beds. These humble, oft-benighted little fellas truly are heroic, keeping the soil turning and healthy. I salute ’em! 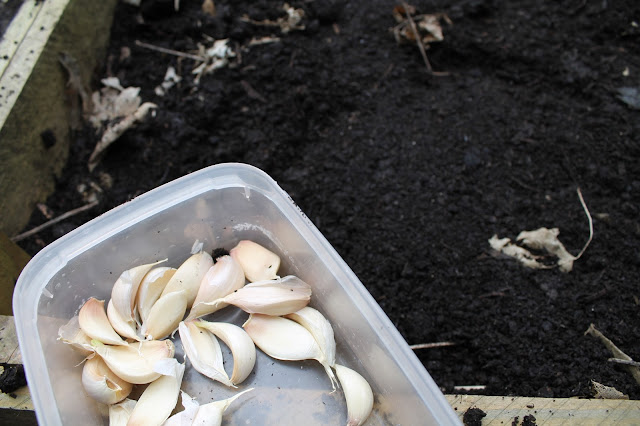 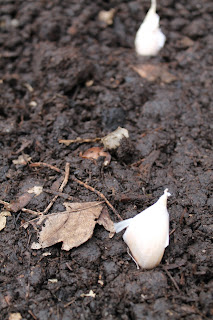 For each of my two square metres of raised beds I planted about sixteen cloves, in a grid of 4×4, spaced about eight inches apart, in rows eight inches apart. Reading around, it seems most recommend more space than this. However, the bargain bucket variety garlic I ended up getting yielded relatively small cloves (eventually meaning smaller bulbs), so a little less room was required I reckoned. To aid my planning and spacing of the rows, to begin with I simply placed each garlic glove atop the soil, so I ended up with a grid of cloves. I then simply tunneled down about two inches into the soil with my finger, placing the clove inside then covering over with soil. (I also tried simply pushing the cloves downwards into the soil, but figured after a couple of attempts this more forceful method may have damaged the outer layer of the clove, so best not to do this.) The clove needs to be the right way up of course when going in the soil, ensuring the flatter end goes in first, with the pointy end (the end which invariably sprouts when left in the veg basket too long) pointing upwards, so that when it sprouts underground, it starts growing upwards into a lovely garlic plant, and forming into a fat bulb below ground.

That’s really about it. After the basics of getting the garlic into the ground I made my beds as fox and squirrel resistant as possible. In my more naive days, I’ve left my beds completely unprotected, only to find half the beds’ contents soon spilt out by foxes using the beds as play pits, or by squirrels burrowing about for a nut they’d likely buried two gardens down. To do this I simply covered the beds with a grid of garden wire, criss-crossing the beds. I also sprinkled the beds conservatively with nutmeg as I’ve read squirrels hate the stuff and won’t go near it. Handy, if it works, and – of course – if it doesn’t contaminate any garlic yielded with a hint of nutmeg. Finally, regarding another pest, the slug, I’ve read that they really don’t like parsley and will avoid crops grown with them. Though slugs don’t touch garlic in any case, I thought for possible summertime growing in the same spot, I’d grow some parsley in with the garlic. It’s easy to grow – apparently – and at this time of year can simply be sown in the spot you want to grow it. Researching further here parsley apparently also attracts bees and even makes companion crops taste better. Should my garlic prove a success later on in the year I’ll let you know if there’s any truth in that!

3 comments on “Making garlic (and parsley)”