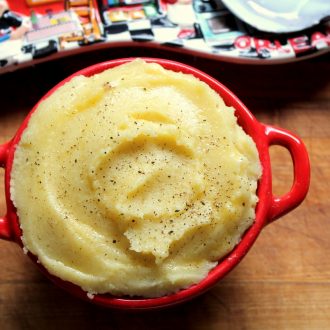 I’m sort of known in my family for having a weird obsession… Sour cream. I just LOVE IT. I love it on baked potatoes, or even as a dip for fries. I love it it as a topping for nachos. I love to spoon it into tacos and fajitas and let it melt in and cool everything down. I won’t have chili without it. Mr. Veggie is indifferent, and sometimes he won’t even bother putting it in his fajita. “I’m not in the mood for dairy” he will say. Hmmm. I don’t understand.

So you’re probably thinking I’m about to tell you how to pour an obscene amount of sour cream into mashed potatoes and call it dinner (because, ya know, I do things like that).

But, as it happens, inhaling copious amounts of full fat sour cream is also a great way to pile on some extra pounds, so lately I have made an effort to get my kicks from elsewhere. And I found that with a little bit of a training, low fat yogurt is starting to hit the spot. A low fat yogurt that has a strong tang to it and no added sugar or thickeners (I like Rachels and Yeo Valley for this). So that is what the recipe actually contains (but yogurt and onion wasn’t such a good headline. It’s not a thing.).

What I am going for  is a nod to the sour cream and onion Pringles that I loved so dearly before I knew better. Using low fat yogurt doesn’t make it healthy. But you get the tang and moisture that you need with less fat than if you used sour cream. There is still cheese and butter to enhance the flavour- these things weren’t negotiable (I tried). And the onion and garlic powders I used aren’t the freshest flavour sources, but they are strong and salty enough not to drown in the potato.

So basically, its a little bit healthier than it might have been, and I’m just going to call that a win!

No ratings yet
Print Recipe Pin Recipe Leave a Review