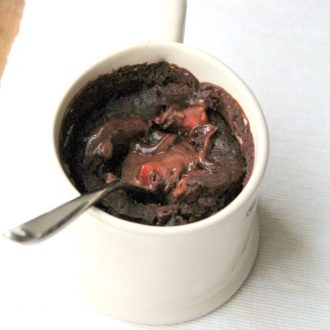 Remember when I showed up late to the mug party?

And this time we’ve got something for Valentine’s Day. Something vegan!

OK, I have to be upfront about one thing. I will need the kind vegan folk who want to make this recipe to go and seek out, or make, a vegan version of nutella. I know, I’m sorry, it’s annoying. But let me help!

You can totally make your own. Looks easy!

UK vegans, plenty of supermarket free-from ranges have this. There’s Chocoreale at Ocado, and I used Nature’s Store Freefrom, from Sainsbury’s. (Unfortunately, while neither contain milk, they “may contain traces” of dairy due to the manufacturing process- so if you’re concerned about this you should make your own or seek a brand which is made in a dairy-free factory!)

Everywhere else, this Epicurious article on alternative brands of nutella – some of which are vegan- might help.

So now that we have that all sorted… lets talk about the mug cake.

Like the last one, it’s very lightly adapted from Julie’s on the Table for Two blog. When I first made this recipe, I noticed that it was almost accidentally vegan. All I needed to do was swap out the milk for almond milk, and the nutella for a nondairy chocolate and hazelnut spread.

But I also thought that strawberries would add even more moisture and yumminess to this cake, and make the center more like a lava cake, with melty delicious strawberry, chocolate and hazel-nuttiness. <— actually a word, according to WordPress spellcheck, but only if you have the hyphen.

So, yeah. Confirmed. This is the center:

So basically, here’s what happens.

With this being the middle.

And a bit of non-dairy ice cream on top? DON’T MIND IF I DO!

Are you wondering about this adorable mug of mine? Probably not, but I’ll tell you about it anyway.

So I asked Mr. Veggie if, instead, we could get gifts which celebrate and honor cows.

He chuckled and agreed. Or so I thought.

He actually thought I was kidding, so while he went out and bought me a sweet, normal gift, I went ahead and ordered him a hand painted cow mug, with a handwritten message from the cow on the bottom, thanking him for keeping the anniversary leather free. And then moo-ing.

Don’t get me wrong, this is a beautiful mug, the nicest we own, and I have zero regrets. But I felt just a little bit silly when I did not receive a cow themed gift back.

What he actually did, as a nod to the leather theme, was to find a card with a photo of a leather suitcase on the front, which he then personalized as an anniversary card.

Anyway, I figured the Thankful Cow mug was kind of perfect for this vegan recipe.

(In case you’re interested, the mug is from Fired Arts and Crafts on Not on The High Street)

Amounts are for one cake! If this is your Valentine’s Day treat, be sure to double it!
Author: Christine Melanson
Sweets Vegan