Two secrets give this vegetarian french onion soup recipe all of the flavor and umami of the original! Running the onions through a spiralizer makes this incredibly quick to prepare, won't sting your eyes, and gives the onions an even finish. Winning!
4.48 from 19 ratings
2 hrs 10 mins
Jump to Recipe 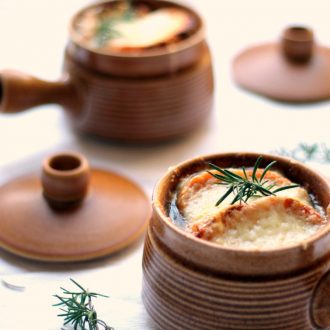 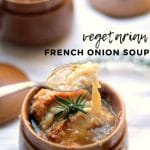 Two secret ingredients give this vegetarian french onion soup recipe all of the flavor and umami of the original! Running the onions through a spiralizer makes this incredibly quick to prepare, won’t sting your eyes, and gives the onions an even finish. Winning!

Juuust in case the title of this post made you do a little snort-laugh, allow me to explain.

To make a vegetarian french onion soup, we have to use vegetable stock. But then you have a lighter colored soup and it really lacks the depth of flavor that the original has. It’s kinda missing something if you just make that swap and leave it at that.

But this vegetarian recipe has a a couple tricks up its sleeve to darken it up and add some umami.

More on that later.

Let’s start from the beginning.

This recipe was dreamt up to solve a little problem I have. French onion soup has always meant a guaranteed hour of tears for me. My eyes must be super sensitive to onions. Chopping six at once? No, no and NO.

I would have to leave the kitchen for, like, the rest of the day. Waterproof mascara would fail me.

So today, we spiralize the onions!

6 onions glide through that spiralizer with total ease and are ready to go in, like, three minutes flat. Practically painless!

As I type this, my eyes do sting a little, but I just put 6 onions through those spiralizer blades so it gets in the air just a little. Chopping six onions by hand, however, would have just about killed me.

When I first made this, I wondered if spiralized onions would make super-long onion noodles in the soup. The answer is nope.

They tend to break up into much smaller pieces somewhere in the cooking process.

The spiralizing process does give you very evenly sized bits of onion though, which adds a sort of professional “I know how to chop things evenly” edge to your soup.

How to make french onion soup with vegetarian broth

So back to the broth thing I mention before. I’ve used vegetable broth in here. I have in the past used faux beef broth to make vegetarian french onion soups and that’s a good, quick fix which lets you follow a traditional recipe.

But for me, this is the magic formula right here. I used a good vegetable stock and then added two special ingredients: soy sauce and Marmite! Both of these ingredients darken the broth and add depth and umami.

What is marmite, where do I get it and what if I don’t have or want it?

So. Marmite is a British thing. Australians have vegemite which is apparently similar.

North Americans have neither. You can buy cheap imported Marmite on Amazon and I definitely recommend it as a vegetarian cooking ingredient, but if you don’t wish to hunt it down, just use some faux beef broth (it’s widely available at Whole Foods).

Two secrets give this vegetarian french onion soup recipe all of the flavor and umami of the original! Running the onions through a spiralizer makes this incredibly quick to prepare, won’t sting your eyes, and gives the onions an even finish. Winning!
4 -6 servings
Prep Time: 10 mins
Cook Time: 2 hrs
Total Time: 2 hrs 10 mins
4.48 from 19 ratings
Print Recipe Pin Recipe Leave a Review 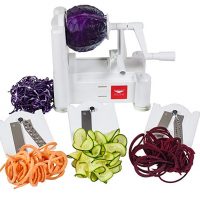