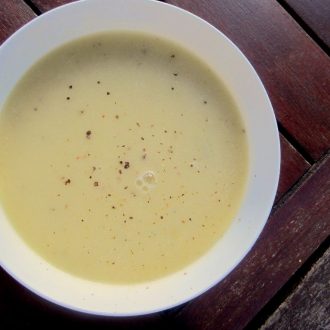 I was not expecting to like this soup. Celery soup is not my Thang.

I only made it to use up some celery from our vegetable box 2 weeks ago that I didn’t particularly want, just to get rid of it. It wasn’t even part of tonight’s meal. It was just intended to be put into tupperwares for Mr. Veggie’s lunches (he loves the celery, you see).

It was originally just going to be celery and vegetable stock pureed but then I thought, Mr. works hard all week, he deserves better than that. I splurged and added… an onion!

And then I saw the truffle oil on the shelf… and the rest, as they say, is history.

Its actually delicious. Light and fresh, but with a deep savoury after-taste from the truffle oil. Incredibly simple too. There is no need at all to include cream. I am always suspicious of soup recipes with so few ingredients but this just kind of works.

You could thicken it up with a potato or two if you wanted- this would make it a little more substantial.

As well as being a simple midweek dinner, or something to make for lunchboxes, it would make an excellent starter for a dinner party alongside some nice bread and butter.

And it would be easy enough to make it in the slowcooker, but add the truffle oil about 15 minutes before serving. Otherwise the heat will lessen the flavour.