A rich and smoky vegan sausage casserole full of roasted vegetables. This comes together in under an hour in the oven for a relatively hands-off dinner that the whole family will love. It's easy to veganise this British classic when so many delicious meatless sausages are available, and I'll show you how to add a little bit of richness in to make up for the lower fat content.
4.86 from 7 ratings
55 mins
Jump to Recipe 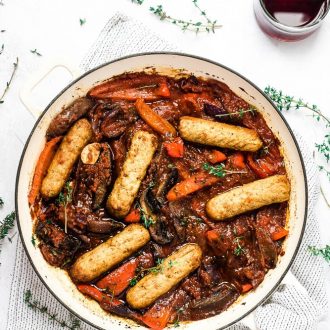 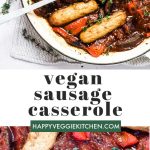 A rich and smoky vegan sausage casserole full of roasted vegetables. This comes together in under an hour in the oven for a relatively hands-off dinner that the whole family will love. It’s easy to veganise this British classic when so many delicious meatless sausages are available, and I’ll show you how to add a little bit of richness in to make up for the lower fat content.

So this is the 260th post on this blog, and the first time I’ve used a so-called “faux meat” as an ingredient. I always said my recipes would avoid using these products, so what’s changed?

Well, I’d say A LOT has changed since 2011 when I first started posting recipes on the internet. More and more people are reducing their meat intake, and at this point I just see veggie sausages as a normal, staple British supermarket ingredient. NOT a weird meat replacer.

I think we all do, right? Most of my non-vegetarian friends eat veggie sausages as well as or instead of meat ones. The current offerings taste so delicious they’re not just for vegetarians who need a straight substitute for meat, they really are for everyone.

So these days it feels appropriate for me talk about how to make sausage casserole with vegan sausages. Now let’s do that!

Why do you even need a recipe for a vegan version?

Of course you can replicate a meaty sausage casserole recipe just by swapping in vegan sausages. So why do we need this recipe?

Well, in a meaty sausage casserole you’d have all the fat of your sausages adding extra flavour and richness into the casserole. Vegan sausages can be drier and not so fatty. A straight swap for vegan sausages would be fine, but I like to overcompensate for the loss of any flavour source.

First, roasting the vegetables! We get more depth of flavour overall this way, and the tasty olive oil they roast in stays in the casserole too.

The Best Vegan Sausages for your casserole

Despite how mainsteam meatless sausages have become, many of them still contain egg so are only suitable for vegetarians. Fully vegan sausages without egg used to be a little more elusive but that is really changing.

What I would heartily recommend is the Tesco Plant Chef Bangers or Sainsbury’s Shroomdogs sausages. The fresh ones, not the frozen ones, which are actually very different. Those sausages are insanely good. So robust, so meaty, so flavorful.

But they are not the sausages pictured, alas, because I only discovered them after posting this recipe – doh! I used Linda McCartney frozen vegan sausages here and like all of the frozen brands I’ve tried, they are soft and bready and delicate. Not the best, to be honest.

If you are working with vegan sausages like that, it’s OK! This recipe accounts for it by frying them in oil and putting them into the casserole whole instead of chopping and submerging them. But if you are going shopping before making this – skip the frozen range. Head to Tesco or Sainsbury’s fresh sections.

I haven’t tried all of the vegan sausages on the market, but Cauldron (fresh) are meant to be good too and other supermarket ranges might also be great. If you’re vegetarian rather than vegan, you’ve got a few more options such as Quorn sausages which are also decent.

And you can of course make your own vegan sausages from seitan! Seitan holds up really well in sauces.

I seriously love recipes that only use the oven. It really suits how I like to cook – stress free, lots of dead time. It can take longer, but ultimately it’s more hands off and more forgiving. In the case of this recipe, it frees you up to make mashed potato or rice, set the table, and whatever else you need to do in the run up to dinner.

The casserole is in the oven for around 45 minutes and you go in every 15 minutes to add extra ingredients. In the last part, you put your sausages in the oven so they can cook alongside.

The timings are flexible. You may want to roast your veg for a shorter or longer time, or your sausages may need longer if cooking from frozen; none of it matters too much.

Customisations and How to Serve

You can of course change up the veg here. I personally don’t love carrots, even though I know they’re a classic sausage casserole ingredient! I just prefer the softer, more melty vegetables in this. You may also want to add some greens – you could stir some spinach or kale in when you add the wine and tomatoes.

A lot of sausage casseroles contain beans. You can certainly add a can of beans here, but you may also want to add some extra tomatoes in that case. And if you’re adding extra tomatoes, I’d also double the wine, smoked paprika and garlic.

What to serve with? For me, it’s gotta be mashed potatoes. But there’s no denying that a loaf of fresh bread or a quick pan of white rice (especially if you have a rice cooker) would be an easier route to dinnertime, and these are also delicious options.

A rich and smoky vegan sausage casserole full of roasted vegetables. This comes together in under an hour in the oven for a relatively hands-off dinner that the whole family will love. It's easy to veganise this British classic when so many delicious meatless sausages are available, and I'll show you how to add a little bit of richness in to make up for the lower fat content.
2 -4 servings
Prep Time: 10 mins
Cook Time: 45 mins
Total Time: 55 mins
4.86 from 7 ratings
Print Recipe Pin Recipe Leave a Review

I’ve used 6 sausages which is the right number for us. Either Mr. Veggie and I eat this whole casserole on our own (yep we’re that greedy) or we have two sausages each, with one sausage for each of our little ones. You might want 8 if you’ve got four people eating normal portions. Doubling the recipe is easy peasy, but you’ll want to use a bigger dish like a roasting tin or lasagne pan. You don’t want a deep casserole dish because the veg would be stacked too high to roast properly.
Cuisine: Modern European
Course: Main Course
Author: Christine Melanson
Serving: 1g, Calories: 590kcal, Carbohydrates: 52g, Protein: 40g, Fat: 30g, Saturated Fat: 5g, Polyunsaturated Fat: 22g, Sodium: 1602mg, Fiber: 17g, Sugar: 17g 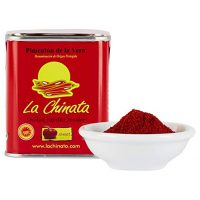 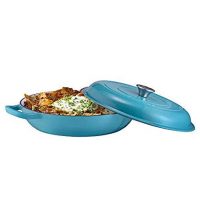