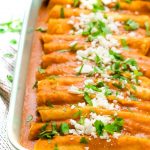 These are not your average cheese and onion enchiladas! Three different cheeses and caramelized sweet onions make for one tasty vegetarian enchilada filling that everyone will love! Easy to put together at home for a family dinner or a potluck. 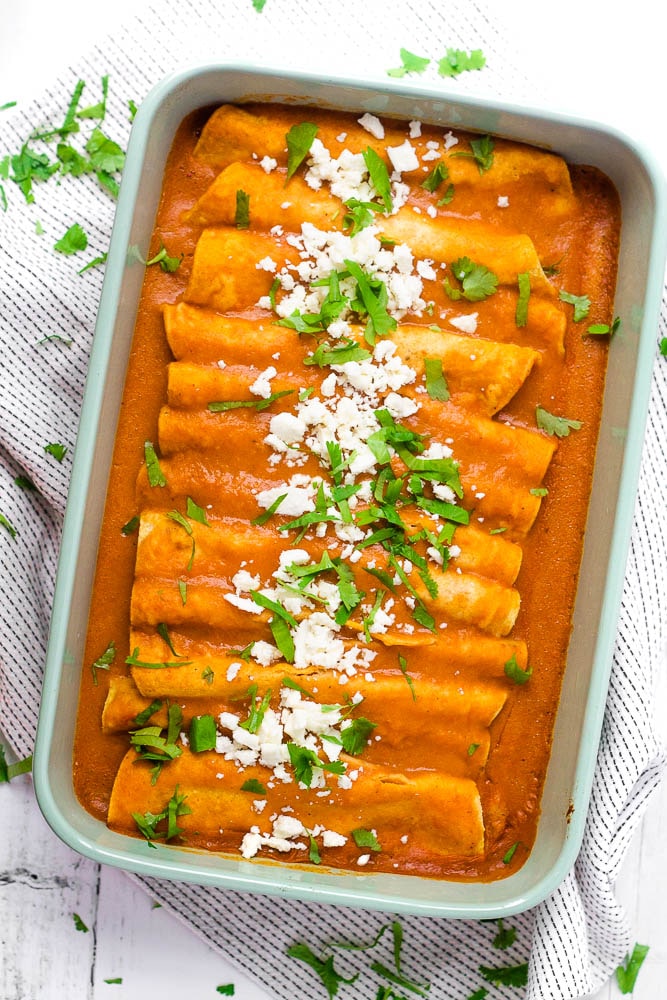 Cheese enchiladas have always been my first choice order from a Tex Mex restaurant menu. There is something magic about the simple combo of melted cheese, red enchilada sauce and soft corn tortillas. 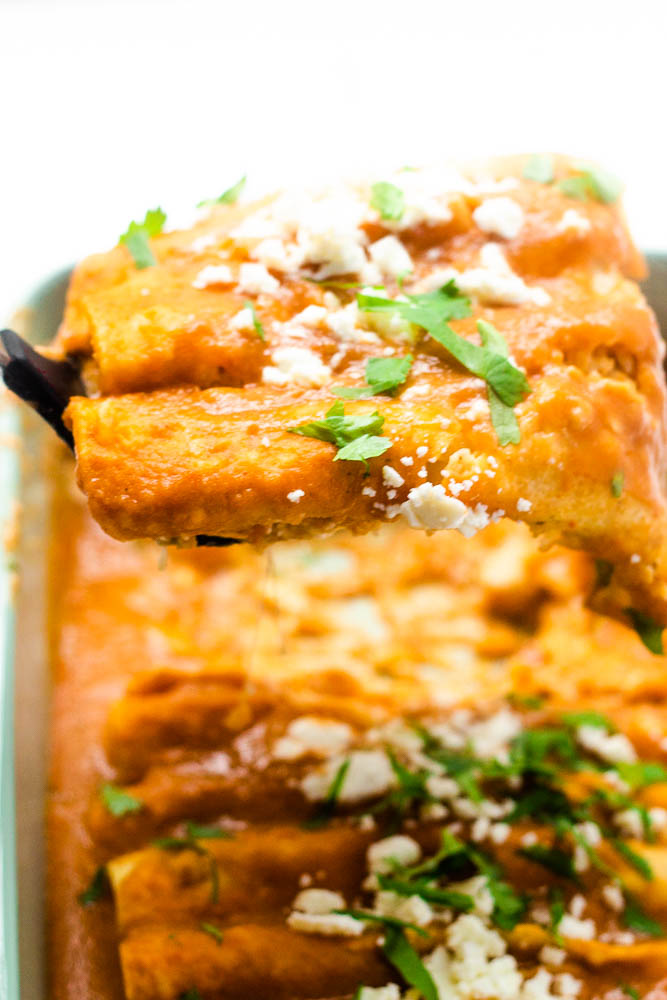 How to Make these Cheese & Onion Enchiladas

Let’s face it, caramelizing the onions is going to add time to this recipe that all the other cheese enchilada recipes out there would avoid. And if you’re pushed for time and looking for a quick and easy dinner, then this is one to save for another day.

Caramelizing the onions is so worth it when you have the time. It just adds a nice sweet touch and an extra depth of flavor. If you don’t have the time, you could add very finely minced raw onion to the filling instead, which is the more usual approach to cheese and onion enchiladas.

If you do decide to caramelize your onions, you can use this extra time to prepare a homemade enchilada sauce and some slaw for serving the enchiladas with. Then, once the onions are ready, you will add them to a bowl with your cheeses and that is the filling done. 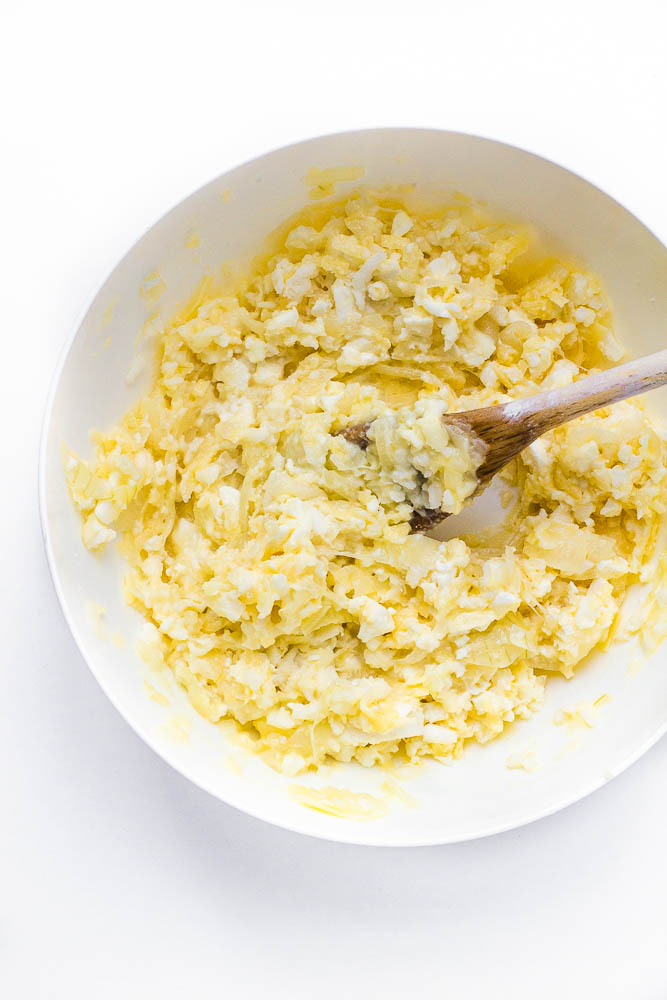 Roll the filling into the corn tortillas… 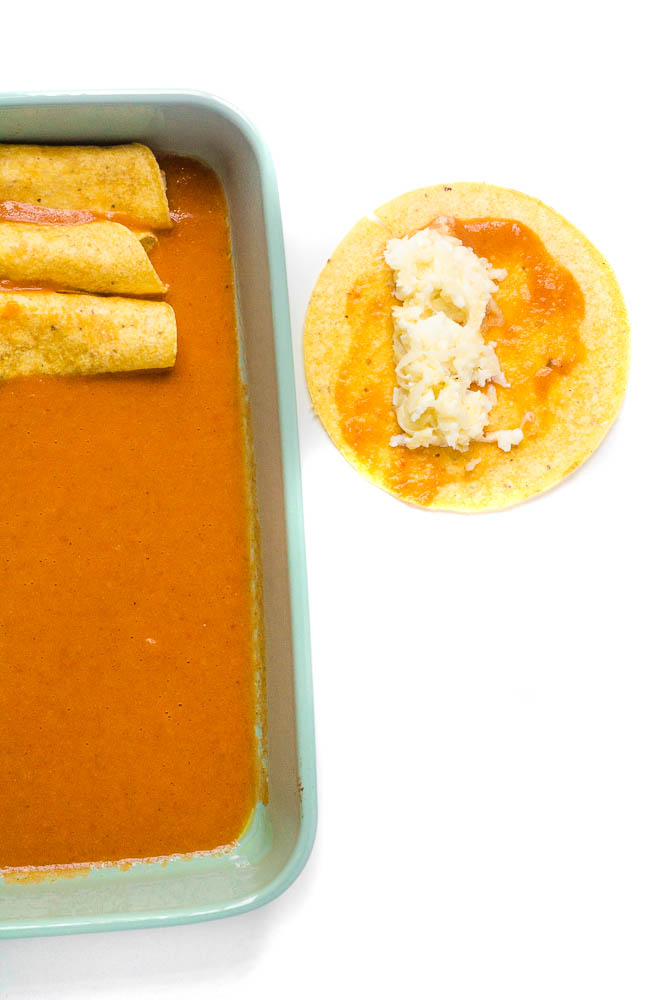 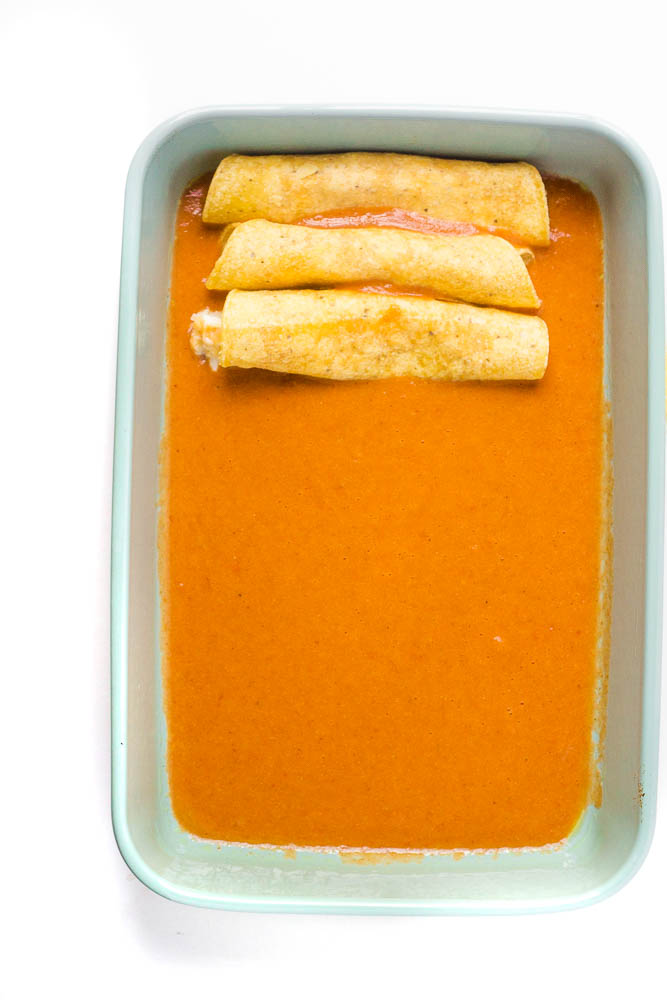 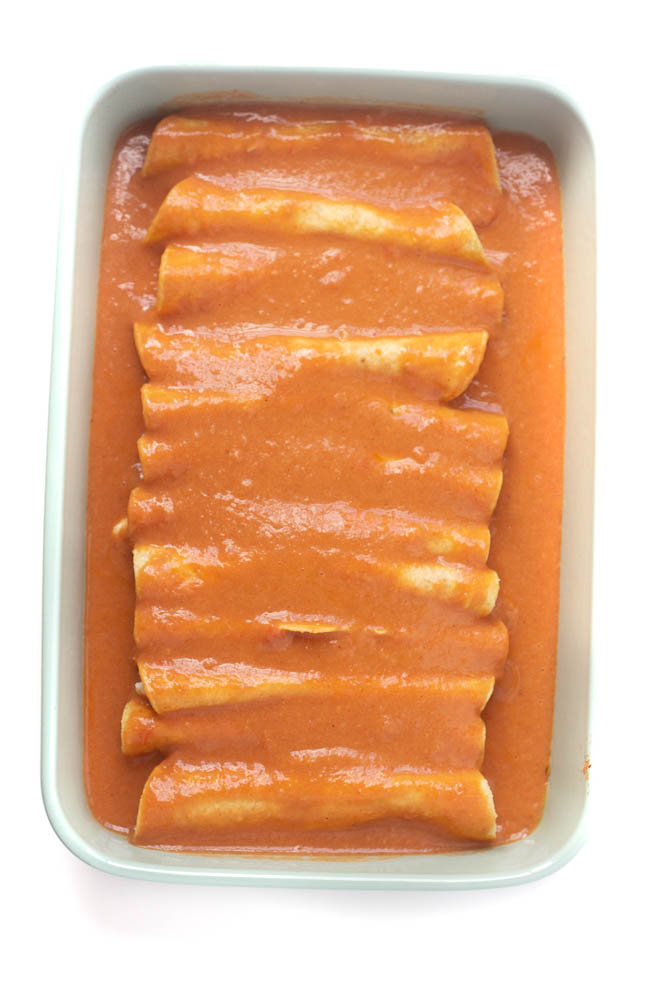 And they’re ready after 20 minutes in the oven! 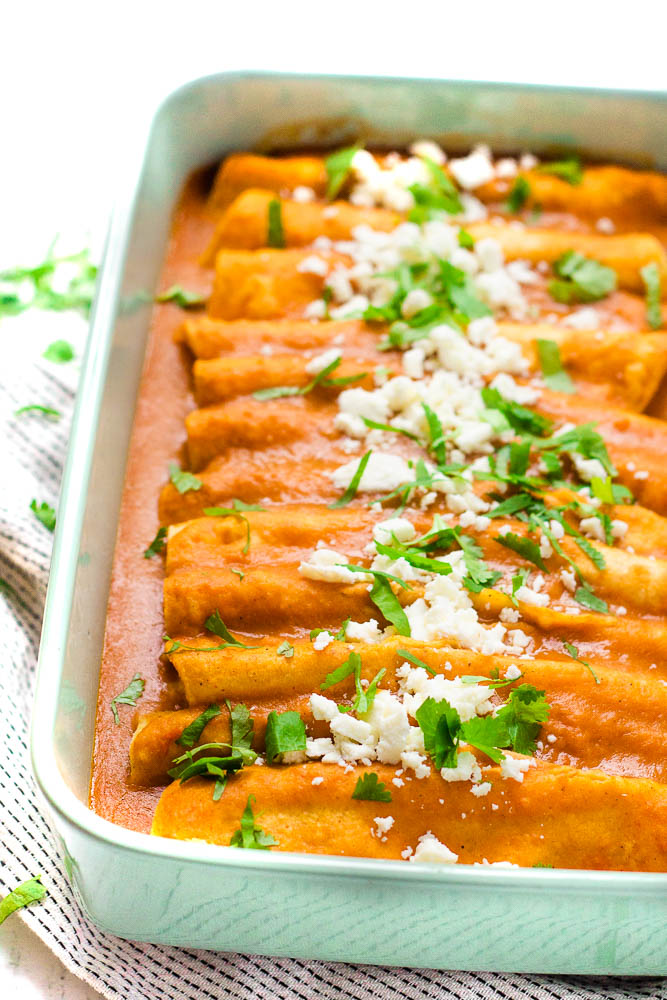 How to Make These Enchiladas More Quickly

If you use ready made or frozen enchilada sauce and batch cook some caramelized onions ahead of time, it could easily be ready in a little over half an hour.

If you’re a superstar organized meal planner, try making caramelized onions in your slow cooker or even in your instant pot at the weekend and then planning this meal + a few others which use them in the week. 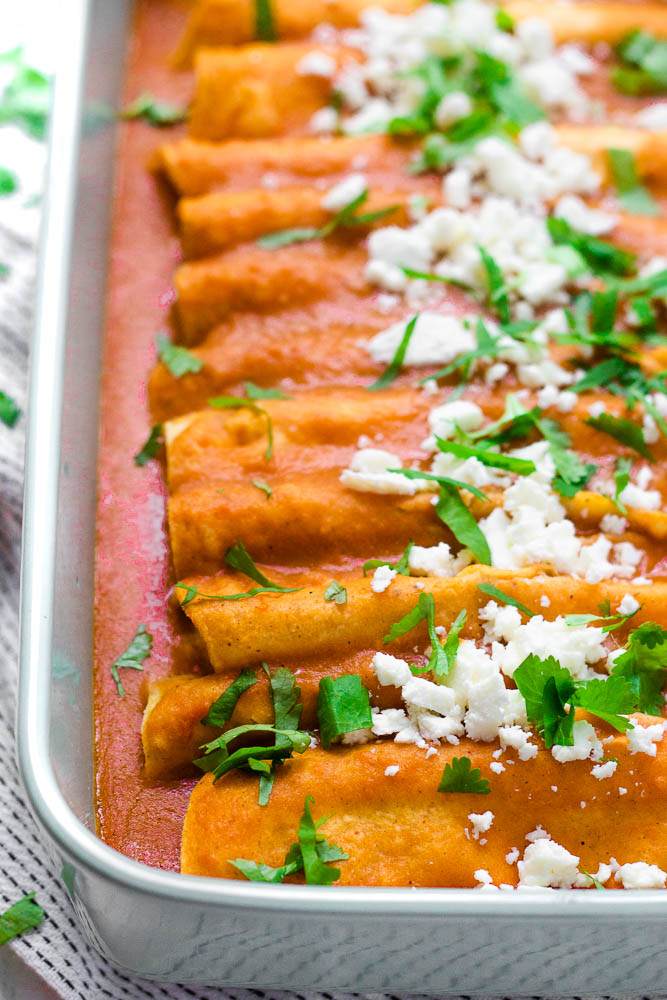 Which Cheeses to use in Your Enchiladas

This recipe calls for feta, cheddar and mozzarella and the resulting filling is creamy, a bit melty and super tasty. 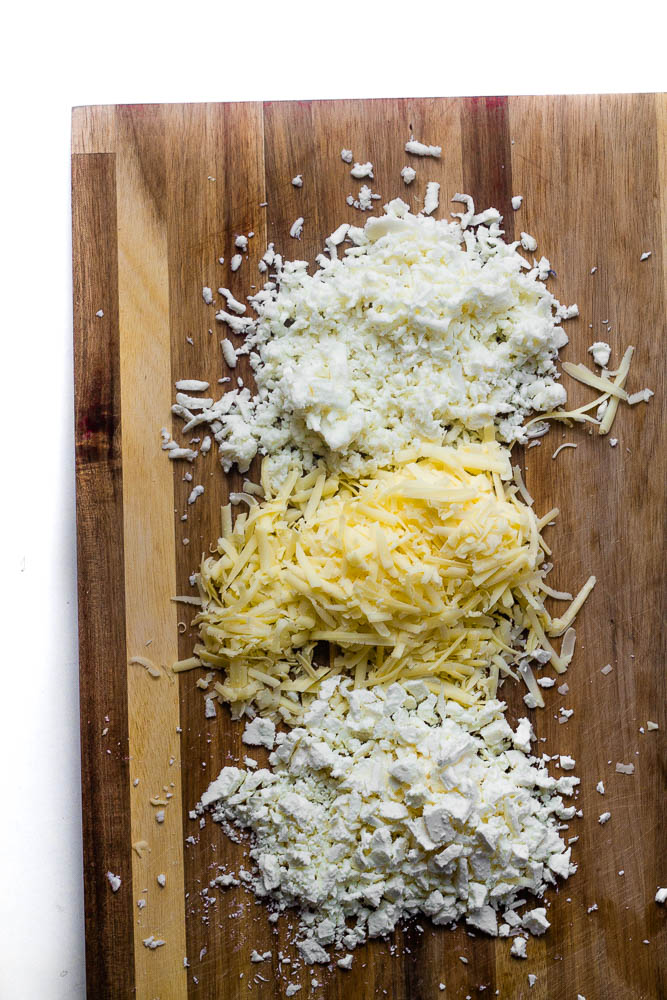 You really want the feta in there to stop the filling from being too oily, which can happen if you’re only using super melty cheeses. If you don’t have feta, try cojita or even some ricotta (add salt if you use ricotta since it is much less flavorful than feta).

Which Enchilada Sauce to Use

For me, red enchilada sauce is a must for cheese enchiladas. If you have a canned or jarred sauce that you love, go for it, but I love to make my own and it’s not too hard!

I first made this recipe while pregnant and heartburn was my constant companion so this Mild Enchilada Sauce Recipe from What Lisa Cooks was a lifesaver, and it’s the one used in the photos.

I also love a good blender enchilada sauce, which is a super easy way to go about things, though the roux based sauces will always taste the most authentic.

How to Serve Your Cheese & Onion Enchiladas

This dish comes out creamy, rich, dense and soft. To balance that out, I love to serve it with a crunchy cabbage slaw. Just some cabbage + sliced red onions + cilantro (coriander) leaves + lime juice. 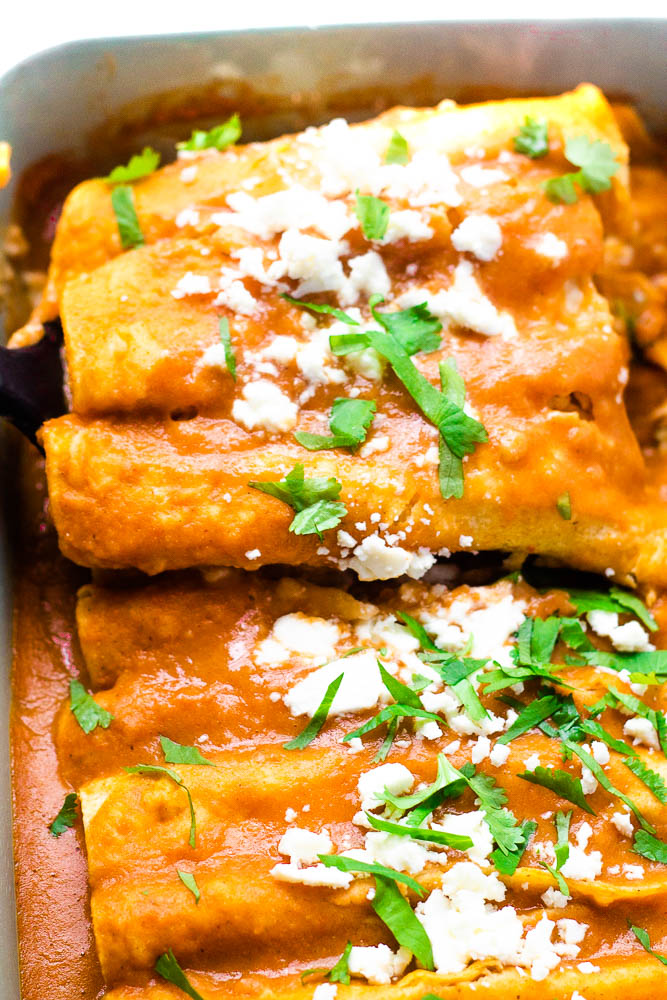 You can also go with rice and beans as a side dish, which I know is more traditional, but this makes a much heavier meal… so I’d always throw some slaw or a fresh crispy salad on the plate.

I don’t personally grill extra cheese on top of the enchiladas, I just leave them soft and moist and sprinkle some fresh feta on afterwards with the cilantro for a garnish. You could certainly add some more of your cheese blend to the top and broil to get a crispy finish if that’s your preference. 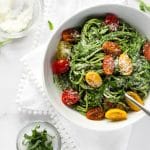 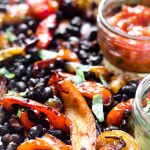