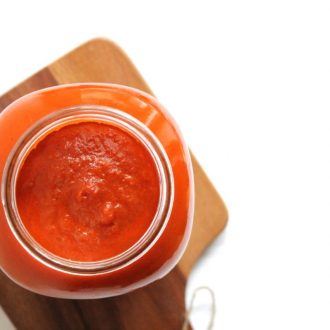 I mean, you’ve read my posts right? That’s probably quite obvious. All the soul searching over the kinds of recipes I want to be posting, all the minute details of all the tiny little decisions that were made to create a recipe and why, why, why it needed to be as it is.

And it doesn’t always serve me well.

I’ve had an example before of when I tried too hard with a photography set up and then as soon as I wrapped up, the portion I slopped into a bowl without trying was way more appetizing (And Pinterest and Tumblr agreed with me on that one, they are loving the sloppy).

And today’s going to take a similar turn.

I have been trying forever to nail the slow cooker marinara. Which was kind of pointless. There are already some great recipes out there, but I thought my ideal sauce would need some wine, and none of them had wine, and so I worked and worked and worked on this marinara recipe and never got it right. It would be too thin or too metallic tasting (weird slow cooker thing).

Then one day I needed a sauce in 6 hours so I figured I’d use the slow cooker, but this was not supposed to be a bloggy recipe, so I just chucked some things in, including wine, and you know where this is going right? It was perfection.

Six out of eight of the ingredients in here are the usual suspects for a marinara sauce. But there are two secret weapons as well. One is the white wine (See, I knew it would belong in my sauce), and one is sundried tomatoes. Both give a huge flavour boost wherever they go, and after six hours of cooking into this marinara sauce, they can congratulate themselves on a job well done.

The sundried tomatoes I used were marinated in herbs and oil, which definitely helps the situation. The ratio is one can of tomatoes to one sundried tomato, so while this is enough to lend that depth of flavor to the sauce, it doesn’t cross the line into being sickly, as many sundried tomato dishes can be.

It is a really, really quick recipe. OK that’s not true, it takes forever because hel-lo, slow cooker, but the prep is incredibly fast. It is also easy to scale up or down depending on how much you need.

Different brands of canned tomatoes will have different amounts of water in them, so the final consistency of the sauce may be a little thicker or thinner than you would like. If that’s a problem for you, just add some extra tomato puree or some water to get things to your taste.
Author: Christine Melanson
Sauces + Dressings